From February 22 to February 24, 2019, another edition of an IPG-conference for the German-speaking IPG-Members took place. This year, the business capital Zurich, was the venue. Stefan Bolliger and his team from Bolliger Treuhand AG organized that event.

The conference was attended by over 30 participants in the 25hours Hotel. This modern hotel is a splash of color in Zurich West between the University of the Arts and the Museum of Digital Arts.

After a rich welcome drink at the hotel, the participants went with e-tuk-tuk's through the urban districts in Zurich to the restaurant "Öpfelchammere" in the old town of Zurich. Since 1802, Number 12, at the Rindermarkt has been the place for people from all over Zurich to meet up and enjoy a warm, cosy atmosphere with exquisite cuisine and premium wine. As an appetizer, a "Reformation Bratwurst" was served on lentils. For the main course, the participants were spoiled with the local speciality "Zürcher Gschnätzlets and Rösti". This evening, some IPG-members tried the "Beam-Challenge" (or at least they visited it …), in which after an acrobatic gymnastics exercise over the beams and drinking of a full glass of wine (with the head down!), the carving of the name into the wood of the venerable house was the winner’s price. The success rate of the IPG members is not known...

Saturday's conference day was all about cryptocurrency and blockchain. Prof. Dr. Walter Dettling led through the topics. In the morning, Bitcoin's origins and founding principles, as well as the basics and operation of blockchains, were expertly explained, while the afternoon featured blockchain and smart contract applications. Prof. Dr. Walter Dettling was a brilliant speaker, who expertly explained the participants to these very interesting subjects. 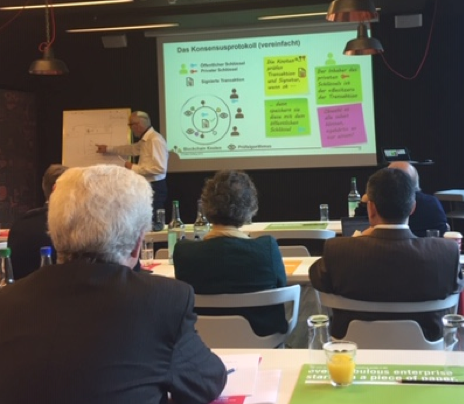 Still with cryptographic hashs, consensus protocols and ideas for blockchain applications in mind, the participants met in the late afternoon for a relaxed city tour in a tram through the various quarters of Zurich. This led to the Gerolds Garden, where in a stylish atmosphere various cheese fondues were served. After further drinks and conversations at the hotel bar, another exciting IPG conference came to an end.

Many thanks to Stefan Bolliger and team for the organization of this great event!